We are fine! We live in Petal, MS which was hit with a major tornado yesterday. For those who follow me on Facebook you know we are safe but I just wanted to update here real quick.

The damage is severe in Hattiesburg and Petal but our area was spared. About a mile away there is major devastation. So far no fatalities reported, thank God!

Anyone who can donate please do so! The Red Cross and Christian Services are both helping in the area. If you cannot donate money then please send healing thoughts and prayers for strength and recovery.

Contact me for any info on where to send donations if you need to.

I was outside smoking last night and when I cam in I discovered that Malachai's mouth was taped shut. When I asked who did it he told me Braeden did. Braeden said his brother was being too loud. LMAO I guess I have threatened to do it one too many times!

Malachai can seriously not shut his mouth. I don't know HOW his teacher at school deals with him! He even talks in his sleep. He never stops talking, singing, humming or mumbling. He also never stops moving (or rarely) (he walks in his sleep too) and he is ALWAYS hungry!

When he was diagnosed with ADHD NO ONE was surprised!

But he is also incredibly funny.

Thank goodness for funny little boys full of energy to get my day started right! I hear him.... creeping out of his bedroom.... he probably wants to scare me.... LOL
Posted by Tracy DeLuca at 8:39 AM No comments:

This a list of things I want to learn. Some of them may never be useful and many of them will be. I am trying to challenge myself to constantly increase my knowledge and skills... having this list just gives me a way to keep that movement going! Some of them are things I already know but want to expand my abilities and knowledge of, some are brand new to me. I plan to tackle one at a time until I know all fo these! It could be a lifetime of learning....

What are some things that you want to learn????
Posted by Tracy DeLuca at 7:53 PM 3 comments:

Down With the Sickness

I didn't even know that big kids could get croup, did you? My 5 year old is home sick for the 2nd day with what we suspect is croup. He is coughing hard (sounds like a dog barking) and so hoarse that he sounds like he has been smoking for 50 years! Slight temp and a little bit of congestion. Otherwise he seems fine! He wants to go outside and play and runa round. I am taking him to the doctor tomorrow morning.

We have been extremely lucky overall... my children have had very few illnesses in their lives! In fact, both of my sons have only ever had a single ear infection each. And both of those were when they were 5. No baby ear infection scares, no flu, no crazy sickness that can't be diagnosed.

I am actually shocked that I have not had to take Malachai (5) to the emergency room yet! He is such a rough and tumble boy that I am just waiting for the first broken bone.

So while I am sometimes overwhelmed with all of the craziness of dealing with autism and ADHD and basic kid sickness... it could be so much worse.

A good friend of mine is taking her 16 year old daughter to the hospital today to try to get brain surgery scheduled. For the second time. She has a brain tumor (non cancerous but dangerous as hell) that has grown back. Two years ago she had surgery but they did not do the radiation they should have and now it has grown back. I can't even imagine the fear my friend is struggling with! So now she has to have brain surgery... again. And then 6 weeks of radiation (I think).

But you know what this bad ass teen did? She shaved her head already. So that she is bald because of her own actions rather than because of the radiation and surgery. And so that she will get used to it and not be upset. She is a total BAMF and so is her Mom. Not only are they dealing with this but she also has a son Braeden's age who is autistic. And her husband is in the Army. BAMF.

SO while I worry about my son (of course) and I get frustrated with the little kid sicknesses that knock our schedules for a loop.... I also embrace them. because it could be so much worse. I could have so many larger worries. I could be facing the possibility of cancer, death, disability... so many other things.

I am hugging my kids extra hard tonight and giving a couple extra kisses. ANd I will be TRYING not to complain about the little things quite as much.

HUGS to Tara and Shonna and all of their family as they saddle up for another round of surgeries. You got this!
Posted by Tracy DeLuca at 12:46 PM No comments:

My sons love My Little Pony: Friendship Is Magic.  They play with toy ponies, watch the show and love to make up pretend stories all about the ponies. I find it highly amusing. There is a whole subset of fans out there called "bronys" that are teen and young adult MEN who love the show. Yeah. A little weird but ok.... so my boys are bronys. :)

Some parents hate television and only let their kids watch a tiny little bit every day, if any. I am not one of those Moms. See, Braeden is autistic. One of the things that I noticed early on for him was that he did not play in a normal fashion and he did not directly respond to requests (verbally) unless I repeated the question again and again.

Television helped him. He finally started responding better. Why? Because of Dora the Explorer and Blue's Clues. When they asked questions he learned to respond. And because he could watch the episodes over and over he got practice. Simple questions, simple answers.

Braeden was never what they term "severe".  He was never 100% non verbal. But he was extremely challenged in the early days.

I credit TV and ABA therapy with many of the steps forward he has taken.

If he wants to watch MLP or Strawberry Shortcake, The Transformers or Dino Dan, the dreaded Max and Ruby or even the hated Fresh Beat Band then I am fine with that.

And actually, MLP:FIM Is a decent show! If you haven't watched any episodes with your kids then I suggest you check it out.

Members of the Faerie Court

Make me giggle. Grab my button. 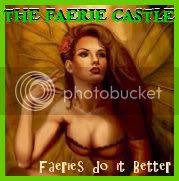